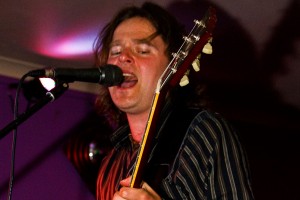 I have always loved music, from being a very small boy. The radio and charts in the early seventies where a mixture of all genres of musical styles, I seemed to love it all. The first musician I remember focusing on, was Elvis. Later in the seventies when punk emerged I was hooked. I got my first guitar at thirteen but I didn’t really start to play until I had just turned sixteen, this is when my Father’s friend started giving me a few lessons and he showed me how to tune a guitar properly, I had been tuning the guitar wrong up until then. Right at this time, May 1984, my Father brought home a Jimi Hendrix album called ”Loose Ends”. I was instantly hooked again, like I had been with punk. I totally got into playing guitar and I had found a great source of music inspiration in Jimi Hendrix.

I like all types of music from classical to punk. I really have a thing for jazz and blues, or anything that the African slaves developed in the USA, Gospel, Soul and Funk I’d put into that category too. I like music to have a good groove to the rhythm. The guitarists I admire are many, but I like bluesy guitar with an influx of jazziness to proceedings. I suppose that’s how I would describe my guitar style.

I formed the band in the 1990’s. We play the songs I have written and blues covers. And things are pretty much the same way today.